Airspace Limits ...Flying Where Others Won't

Many US airports are included in a system (happens to be called LAANC) that allows drone pilots to request airport authorizations up to certain altitudes (depending on proximity to the airport). Generally, the authorizations are automatic, but not always. Sometimes LAANC is “down,” and sometimes a control tower won’t grant permission to a drone operator. The effectiveness of this system has improved in recent years so LAANC approval is relatively straightforward to obtain. At FnGravity, we request LAANC approval days in advance of a flight to virtually eliminate last minute hiccups in the system.

In addition, most drone pilots use drones from DJI as we do at F(n)Gravity. Flying near airports that have any FAA limitations require an “unlock” from DJI. Otherwise the drone cannot take off.

This is the airspace around Dulles Airport (IAD) in Northern Virginia. Each box is 1/4 mile x 1/4 mile and the number in each box is the highest altitude above ground that a drone can fly. The LAANC system can automatically enable a drone pilot to receive authorization to fly up to the max. Click on the image to see a larger version.

What happens when LAANC isn’t available for a specific airport or when a flight requires us to fly higher than the permitted “grid” altitude? F(n)Gravity has experience obtaining FAA approvals for many airports in Virginia, Maryland, Delaware, Pennsylvania and West Virginia. Historically, these airports have included:

See the next section below to see how we address flights near DC’s Reagan National Airport (DCA).

DC No Fly Zone…YES We Can!

Flying drones within 15 miles of Washington’s Reagan National Airport (DCA) has a unique set of limitations. Some people (including many drone pilots) are under the impression that drone flights this close to DCA is just not possible.

There are actually three different areas with different restrictions in the DC area. 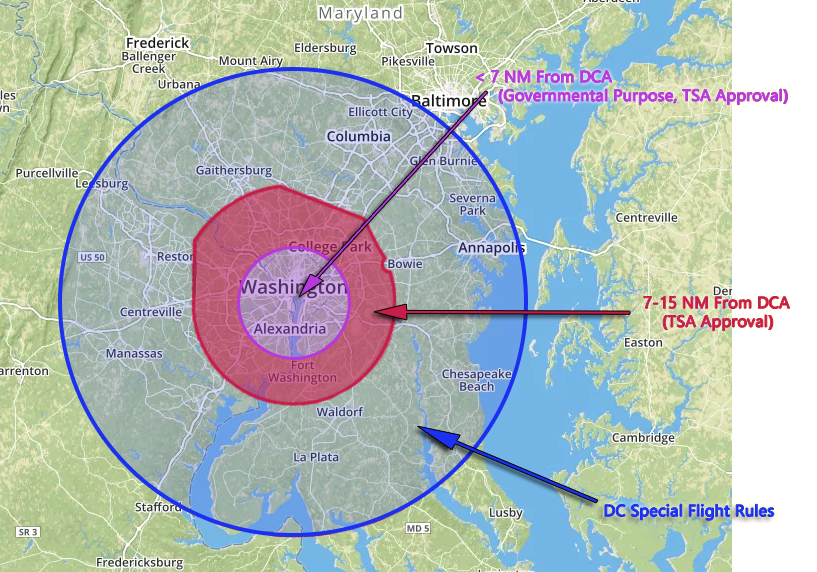 So if you have a need in the restricted area around DC, don’t give up. We will help you figure out if a flight is possible and what steps will be needed to make it happen.